Down but not out

Well since my last post about the layout, I have had to move and take the layout apart.
It did survive the move as it was designed to do. There is some track repairs and then some scenery repairs that will have to be made before trains once again roll. But the main section that was completed, the Griffin area, has been temporarily mounted on the wall to keep it from getting any damage. That module will also receive some upgrades to it as it will no longer be an end module with the track returning to the back side. It will be reconfigured to have another module connect to it on the facing right side. The module that was connected to it on the facing left, will also receive some track upgrades as well.

I do not have a new track plan for the layout but the layout will grow in size to about three times the size it was originally build. It was originally approximately 60 sq ft and will grow to approx. a 12x18 layout with the depth of the layout being two feet deep. This is the tentative plan as of right now. There are some other options that I am considering and one of them is to run it as a point to point layout along three walls of my new train room. The length of two wall runs would be 18ft and the other would be 24ft. As there are quite a few options that I have, I have yet to come to a set plan but when I do, it will be presented here.
Posted by stewarttrains_98 at 1:21 PM No comments:

Well I had a goal of getting the Griifin area to a stage of being complete without all the details by the end of 2012. This goal was to have the area completed enough to give a non-modeler a sense that it was complete. Well I did not meet that goal completely but I made enormous headway in the past 2 months that I have been working on the area. From the previous post that I have made, I had to work on buildings, build a road and form a hill for the road bridge, do scenery, make trees etc. Well I would say that I achieved 85% of my goal. There is a section of the town that has an open space that I have decided to fill with two buildings that I have to build, paint and eventually detail. Also the tree making project continues. I think that I still need to make about 20 something trees to get the scene where I want it to be. Well here are the current pics of the progress.
I also built a fence and placed around the parking lot of the freight house to break up the openness of the scene. 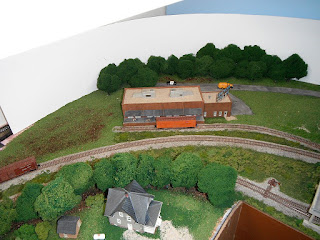 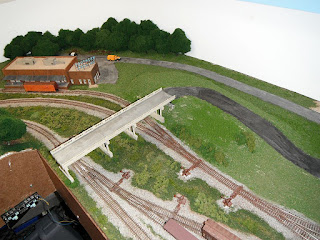 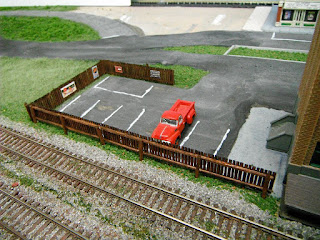 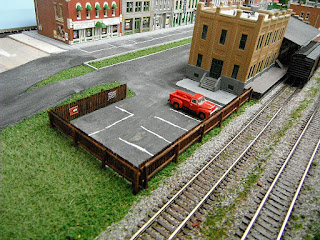 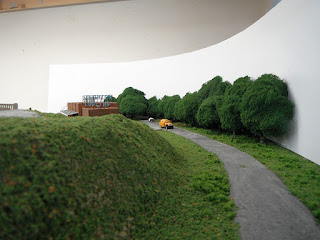 Posted by stewarttrains_98 at 2:07 PM No comments: